What about the Boricuas that left the island?

If you are reading this website more likely than not, you are a Puerto Rican that grew up in the states which means at some point, your ancestors moved from the Caribbean and became a stateside Puerto Rican. While there are Puerto Ricans all over the United States, I will highlight the locations that have the longest historical presence of Puerto Rican communities as the purpose is to highlight ancestry. 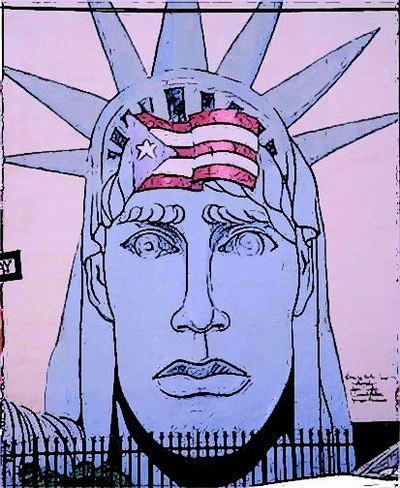 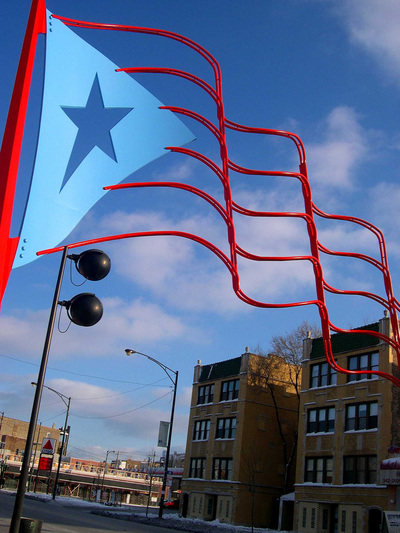 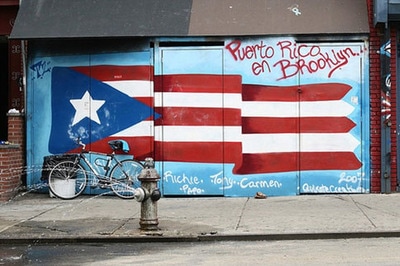 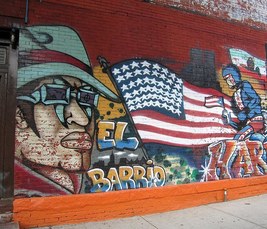 Puerto Ricans have been in New York for more than two centuries beginning in the 1800's. At the time, people from the island were still citizens of Spain. After the United States took control of Puerto Rico in 1898, many migrated north to work in East Coast factories and the farms of New Jersey. They settled first in Manhattan in East Harlem, later known as Spanish Harlem and now, El Barrio. Eventually, the community grew larger in size and spread out to Hell's Kitchen, the Lower East Side, the Bronx, and Brooklyn. Today, you can find Puerto Ricans in every part of New York City. In the 1940's Noel Estrada lived in New York City and composed the most beloved song by all Puerto Ricans, En mi Viejo San Juan, an ode to the longing to return to Puerto Rico.
The Puerto Rican experience in New York has been captured in many forms including the Academy Award winning movie, West Side Story; Tony-Award winning musical, In the Heights; the now-defunct musical by Paul Simon, The Capeman; and El Cantante, a movie about salsa singer, Hector Lavoe. 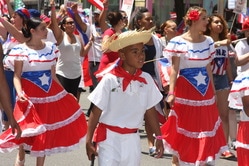 The large population of Puerto Ricans in New York has lead to the founding of many organizations created to reflect, celebrate and support the community.
​New York famously hosts the largest Puerto Rican Day Parade, about to celebrate its 60th year. Former Grand Marshals include Jennifer Lopez and Ednita Nazario. It was once infamously included in an episode of Seinfeld!  ​
New York also is home to El Museo del Barrio on 5th Avenue in its 45th year of operation celebrating Puerto Rican arts and culture. As well the Nuyorican Poets Cafe in the East Village since 1973.
ASPIRA was founded by Dr. Antonia Patoja in New York to help Puerto Rican youth graduate from high school. ASPIRA has now grown to have affiliates in several states and Puerto Rico. Boricua College and the Center for Puerto Rican Studies at Hunter College are higher educational entities that promote the understanding of Puerto Rican heritage and the interests of Puerto Ricans in New York. 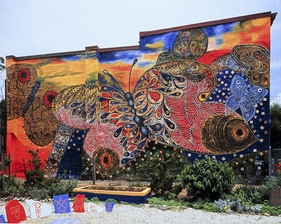 Puerto Ricans have a long history in Philadelphia although in the early 1900's their numbers were much smaller compared New York. The Puerto Rican population grew when manufacturing brought them in in the post-WWII migration of the 1940's. The first enclaves were in the Spring Garden (now known as Fairmount) section along Wallace and Mount Vernon Streets between 21st and 16th streets. Also in Northern Liberties, mainly along 5th street. Both neighborhoods sit just north of Center City. While these neighborhoods still have a small Puerto Rican community, the majority of the population now live in West Kensington, Fairhill, Norris Square, Feltonville, Olney, and Juniata. La Calle de Oro runs along 5th street through many of these neighborhoods and houses many Latino businesses.

Philadelphians have been walking up to to the take-out window to order delicioso mofongo since the 1970's at Porky's Point, at the corner of 5th street and Rising Sun Avenue (see below.) Freddy and Tony's and El Bohio also serve amazing comida boricua.

Some notable Puerto Rican Philadelphians include: 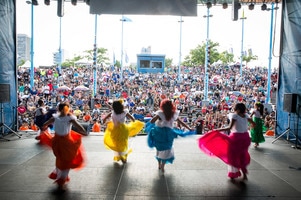 Each year, on the last Saturday in September the Latino non-profit organization, Concilio, hosts the Puerto Rican Day parade which in recent years has included other Latino groups. The day after, cultural center Taller Puertorriqueño hosts the Feria del Barrio which is a day long celebration in the heart of the original Latino community of Philadelphia. ​During the summer Philadelphia hosts the Hispanic Fiesta (formerly the Puerto Rican Festival) next to the Delaware river at Penn's Landing.

Since 1970, Puerto Rican Panorama with host Diego Castellanos, has been on the air on 6ABC. It is a weekend program that highlights events and leaders in the Latino community of the Greater Philadelphia area which includes Camden, New Jersey. 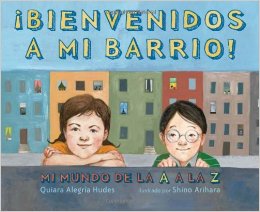 For kids about being Puerto Rican in Philadelphia. In English and Spanish. 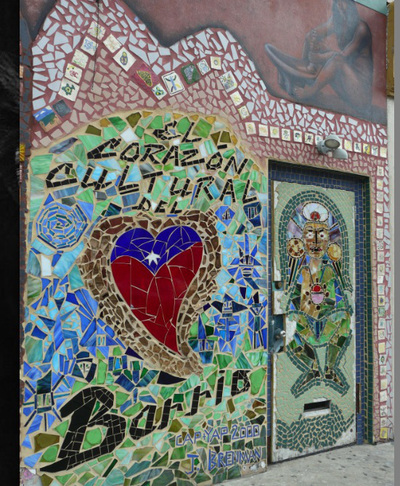 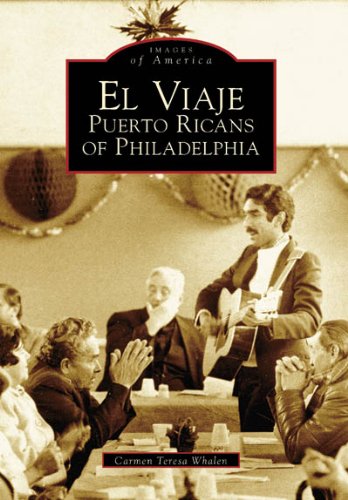 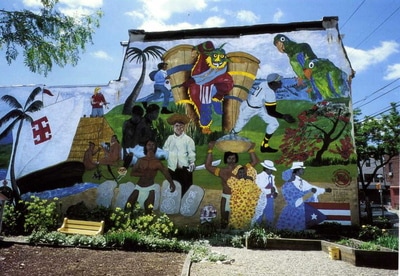 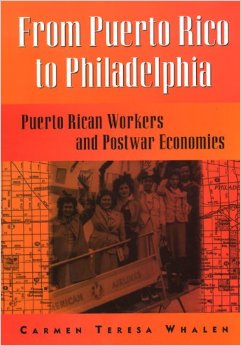 Puerto Ricans began leaving New York and filtering into Chicago in the 1930s. In the decades after, word spread to the island and the migration began. Although the original neighborhoods of Black Belt and Lincoln Park have since become gentrified, the Puerto Rican community has survived and thrived. In recent years, the population of Puerto Ricans in the Chicago area has shifted to the suburbs and the neighborhoods Logan Square and Hermosa. The famous Paseo Boricua (left) in Humboldt Park many not be at the center of the Puerto Rican population anymore, but it is at the heart of the cultural pride for Boricuas in Chicago. The city hosts many festivals around the year along Paseo Boricua including the Puerto Rican Festival and Parade in June. Nearby, La Palma is a Puerto Rican restaurant in Humbolt Park recommended by the New York Times in their 36 Hours in Chicago article.

In 1973, the Puerto Rican Cultural Center was founded and helps the community in health, education and housing as well as various cultural initiatives. They host the Three Kings Winterfest annually.
In 2000, the National Museum of Puerto Rican Arts & Culture was founded. It is located in Humbolt Park.
Nothing Like the Holidays, a holiday film, with Chicago native Freddy Rodriguez, sheds a light on the Puerto Rican experience in the Windy City.
Ranker lists the Top 10 cities with largest Puerto Rican populations.

“This is your heritage,' he said, as if from this dance we could know about his own childhood, about the flavor and grit of tenement buildings in Spanish Harlem, and projects in Red Hook, and dance halls, and city parks, and about his own Paps, how he beat him, how he taught him to dance, as if we could hear Spanish in his movements, as if Puerto Rico was a man in a bathrobe, grabbing another beer from the fridge and raising it to drink, his head back, still dancing, still steeping and snapping perfectly in time.”  ― Justin Torres, We the Animals